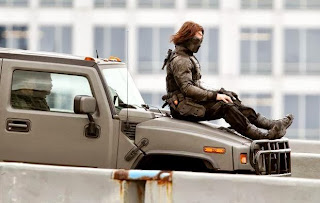 Plot:
“As Steve Rogers (Chris Evans) struggles to embrace his role in the modern world and teams up with Natasha Romanoff, aka Black Widow (Scarlett Johansson), to battle a powerful yet shadowy enemy, the Winter Soldier (Sebastian Stan) in present-day Washington.”

Earlier pictures of Anthony Mackie who plays the role of Falcon, a likely ally of Captain America:

Captain America and Black Widow have been spotted too:

There’s also a video showing Captain America being thrown away like a doll:

Did Captain America get a close-up look to the Winter Soldier’s bionic fist in the scene above?