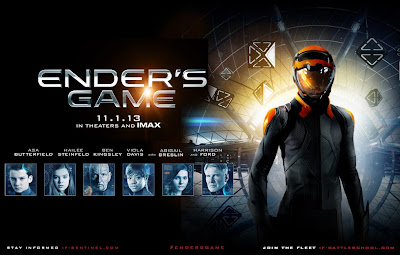 Ender’s Game Movie based on the novel of the same name by Orson Scott Card.

ENDER’S GAME
Plot:
“In the near future, a hostile alien race called the Formics have attacked Earth. If not for the legendary heroics of International Fleet Commander Mazer Rackham, all would have been lost. In preparation for the next attack, the highly esteemed Colonel Hyrum Graff and the International Military are training only the best young minds to find the future Mazer. Ender Wiggin, a shy but strategically brilliant boy, is recruited to join the elite.”

The visual effects look definitely awesome, and there’s some real acting talent here. So, if they haven’t tweaked the original story too much, the film should be damn great!