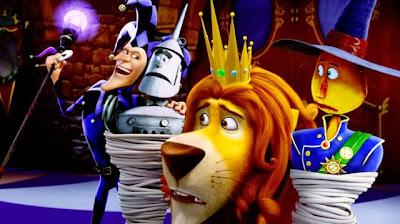 We’ve got our hands on a new trailer for “Legends Of Oz Dorothy’s Return” (previously titled Dorothy of Oz), the upcoming animated movie directed by Will Finn and Dan St. Pierre for Summertime Entertainment:

LEGENDS OF OZ: DOROTHY’S RETURN
Plot:
“Dorothy Gale (Lea Michele) returns to Kansas to find it devastated. Dorothy then finds a new way to get back to the Land of Oz only to discover that her old friends the Scarecrow (Dan Aykroyd), Tin Man (Kelsey Grammer), Cowardly Lion (Jim Belushi) and the entire Land of Oz are all in grave danger. On Dorothy’s new journey through Oz, she meets new friends like a marshmallow man named Marshal Mallow (Hugh Dancy), a china doll princess (Megan Hilty), an ancient tree-turned-tugboat named Tugg (Patrick Stewart), and a large owl named Wiser (Oliver Platt). With the help of her new friends, they band together against a wicked Jester (Martin Short) who wants to control Oz by turning important people into marionettes.”

Anyway, there’s also a new series of pictures from the film:

And a new series of character posters:

So since the adventure never ends… are you ready to follow the yellow brick to an “amazing” new adventure?

Trailer and Poster of Suck It Up ...