The movie trailer of Toy Story 3 has been officially released by Disney Pixar, so here it is in HD: 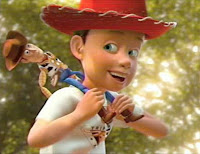 Toy Story 3 is a nostalgia-soaked movie… I guess it’s the Disney side of Disney Pixar that insisted on releasing this (useless?) new sequel…
:-/