If you heart isn’t too weak then dare to watch those two scary clips of Halloween 2, the upcoming horror movie directed by Rob Zombie:

Halloween II – Call 911!
Halloween 2 – In the mirror
Does the tricky Mike Myers accept treats? Or does he slash you whatever you do?
:) 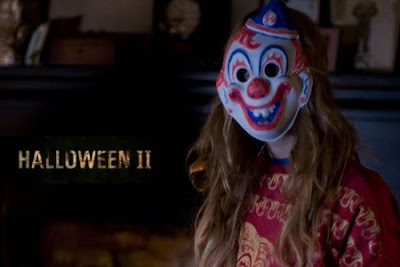 This new picture of Halloween 2 featuring Laurie Strode Below wearing a clown mask and holding a knife behind a woman in distress cause some speculation on Rob Zombie’s Halloween 2: 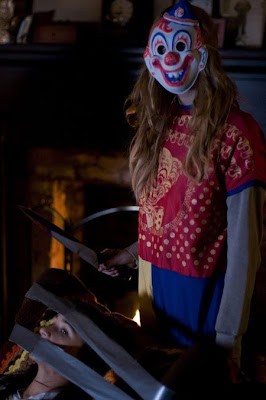 Does Laurie have the crazy in her head too? Like Mike Meyers?
:{

Rob Zombie’s Michael Meyers is an über-freak! Watch those two new TV spots of Halloween 2 that just popped up online:

The freak Michael Meyers is back in town on August 28th… Safe to watch in theaters, but maybe should avoid to go back home after… Who knows… the evil Mike Meyers from Halloween 2 could be waiting for you over there…
;-P

Poor Laurie Strode, her crazy brother is back in town in the movie Halloween 2, and he’s isn’t here to give a hug:

Do you like Director Rob Zombie’s take on the Halloween movie series? I do!
:)

Welcome to Haddonfield general.
Mike Myers (Tyle Mane) is back home, and it’s not to give friendly hugs to people… Lock the door, and keep take your axe!
:-{

A new trailer has been released for Rob Zombie’s Halloween 2:

2 years ago the terror vanished.
Then the visions began…
Now the nightmares will become reality!

Family is forever.
This new Halloween movie takes place directly after the end of Rob Zombie’s first remake: the film is going to show of Michael Myers’ murderous rampage through the eyes of Laurie Strode, the sister he hunted.

I thought Jason was the scariest freak in horror movies, but now I start to think that Mike Myers is probably scarier…

A new movie poster of Rob Zombie’s Halloween 2 has been unveiled:

The Stepfather does not really agree on the tagline of this Halloween 2 movie poster…
;-P

Thanks to the featurette here below we may a better look inside Halloween 2, the upcoming horror movie directed by Rob Zombie:

Halloween 2 Behind The Scenes

Rob Zombie should star in his own movies: besides having the right name he got the right style for it!
:)

Plot:
“Michael Myers (Tyler Mane) returns to his home town of Haddonfield, bringing death in his wake, to bring closure to the secrets of his past. An unlikely individual steps up to put an end to Michael.”

The movie Halloween 2 is going to be quite realistic and rather violent.
:-/

A new official poster of Rob Zombie’s H2 movie has been unveiled:
(Click on the poster to enlarge it.)

Plot:
“Laurie Strode struggles to come to terms with her brother Michael’s deadly return to Haddonfield, Illinois; meanwhile, Michael prepares for another reunion with his sister.”
I pity Michael Myers who can’t be freed of his obsession… Poor evil Mike!
;-P

Michael Myers (played by Tyler Mane) is back to harass Laurie Strode and to make her life a real nightmare again!

Below some new pictures of Rob Zombie’s H2 movie:

I hope you took a look to the picture of Michael Myers in his full glory!
:)

The trailer of Halloween 2 has leaked online. So you may watch below this bootleg Halloween 2 movie trailer if you’re in a hurry or you may wait for a the HD version to show up later during the day.

Update: We now have the official movie trailer of Halloween 2 in scary HD:

At long last but not least we may have a look to some footage of Rob Zombie’s Halloween 2! ET got an early look at the upcoming Halloween 2 trailer:

Here below the latest batch of pictures of Halloween 2, the sequel of the remake halloween movie by the well-named Rob Zombie:

The movie H2 will pick up at the exact moment the first movie stopped and follow the aftermath of Michael Myers murderous rampage through the eyes of heroine Laurie Strode (played by Scout Taylor-Compton).

Some may be reluctant to admit that Rob Zombie’s take on the Halloween movies is really adding something better to the franchise, but that’s not my case: I do believe that Rob Zombie is doing great with his reinterpretation of Halloween.

I bet that Halloween 2, aka H2, will be as frighteningly entertaining as the first opus by Rob Zombie.
:)

Director Rob Zombie is back for Halloween2, a movie sequel to his remake of Halloween. The new film will take place directly after the end of his remake. But this time it will focus on Laurie Strode, the sister the crazy and evil Michael Myers hunted.

Here below a teaser poster of Halloween 2, aka H2: